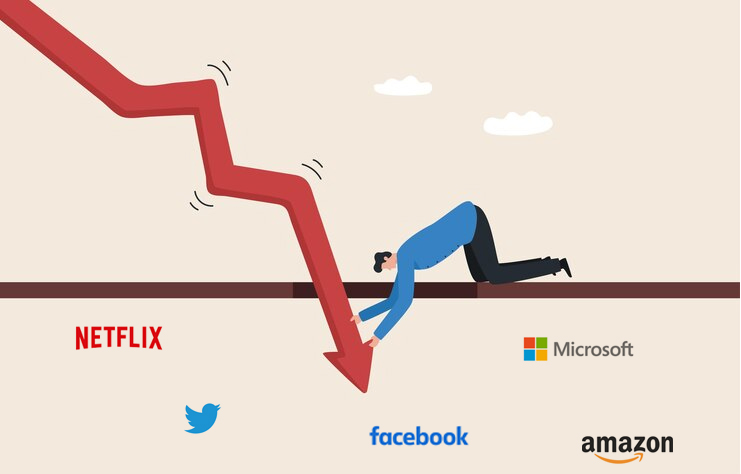 Top 5 companies most impacted by the current slowdown (7 Min)

Top companies like Microsoft, Twitter, Netflix, Snapchat  and many others have reduced their workforce by thousands in numbers, while some other companies like Amazon,Meta and others have stopped hiring and are planning to layoff many of their employees. It is proving impossible for the top companies to maintain that growth. Cloud computing spending is scrutinized by the businesses disturbed by the slowing economy. Computer and smartphone sales are slowing down across the world. The shoppers have returned to the stores and started spending their money on concerts, travel and the sporting events again. As a result many of the top companies have been impacted very badly. Here's a list of the top 5 companies which have been most impacted by the current slowdown:

Microsoft: Microsoft  which is perhaps the tech industry’s most reliable performer, has predicted a slowdown through the end of this year at least. Despite being one of the pioneers Microsoft has also felt the blow of the economic slowdown. Microsoft had staff cuts across multiple divisions recently. The layoffs included around 1,000 employees. This was the third round of lay offs in the company this year. These layoffs impacted less than 1% of Microsoft's sizeable workforce of around 221,000 all over the world.

Netflix: Netflix has also felt the heat of the rising inflation and the economic slowdown despite their immense growth in the last decade. The company has gone through two rounds of downsizing, one in the month of May and the another in June, laying off more than 500 employees. Netflix, already weakened by the slowing subscription growth, hopes to revive its business with the release of a lower priced service which is subsidized by ads.

Twitter: Twitter laid off 50 per cent of its entire workforce, which was around 3500 people, in order to cut costs and move towards profitability. After Elon Musk’s acquisition of Twitter, the company has gone through mass layoffs. Another report suggests that Musk fired thousands of more people in the second round of layoffs which has reportedly affected somewhere around 4,400 out of the remaining 5,500 people. The report said that the impacted employees didn’t get any prior notice and were terminated, although Twitter hasn’t revealed any details officially yet related to the recent round of the layoffs.

Facebook: This year Facebook for the first time reported a decrease in daily users, which combined with the increased competition, a lower revenue forecast and the advertising business hurdles sent its stock prices way down. The company’s stock is now 50 percent lower than earlier in this year. Facebook has told it’s engineering managers to lay off the low performing employees in the face of a slowdown. Moreover, the company has also frozen hiring earlier this year. One of Meta’s largest shareholders, wrote an open letter to Mark Zuckerberg urging to cut costs by letting go off people in order to fix their finances.

Amazon: Amazon had more than 795,000 employees at the beginning of 2020, is now pulling out it’s warehousing operations, getting out of leases and delaying their plans to open new facilities. The company had around 1.52 million people in the end of the second quarter this year, which was almost 100k lesser than at the end of the first quarter. The tech giant and the retail aggregator Amazon is planning to slash jobs across it’s healthcare divisions, Amazon Care and will cut off more than 150 jobs as it plans to reduce it’s telehealth offering, as per the regulatory filings submitted in the Washington state of US.

CONCLUSION: These top companies led the way for the economy over the last decade and buoyed the stock market during the worst days of the coronavirus pandemic. These companies are having more or less the same problems as the rest of the economy because they invested during the Covid times in order to keep up with rising demand. However, as the spending is slowing now, they’re trying to adjust amidst the high inflation and the rising interest rates. Even the biggest giants are facing tough days now and trying hard to cope with the situation.