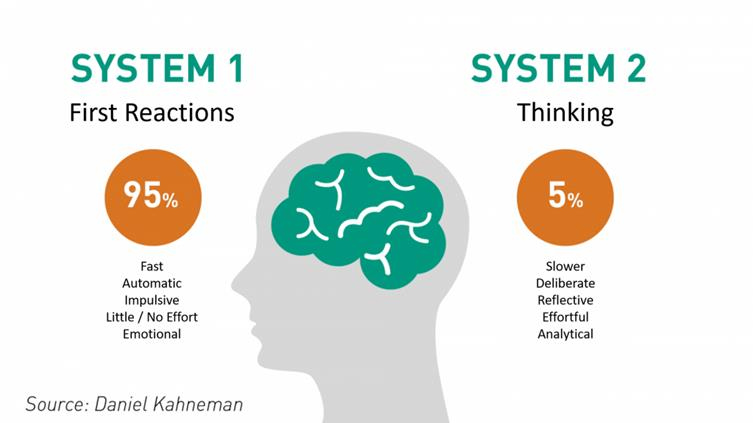 Unconscious Bias: How do you find and fix it (5 minutes read)

In his book Thinking Fast and Slow, psychologist Daniel Kahneman takes us on a ground breaking tour of the mind and explains the two systems that drive the way we think. System 1 is fast, intuitive, and emotional; System 2 is slower, more deliberative, and more logical. When deciding which resume to pursue, we weigh a few factors deliberately. But for hundreds of other factors, we must rely on intuitive judgement and we weigh these unconsciously.

In our earlier article on this topic we acknowledged that unconscious bias exists. It’s important to remember that most bias stereotypes do not come from a bad intent. Bias is something learned over many years. We just have to acknowledge their existence, how they affect what we do as leaders and actively work on ways to limit their impact in the workplace.

Eric Kandel, a neuroscientist at Columbia University who received a Nobel Prize for his work on memory, was once pressed to say how much of the mind works unconsciously; he gave an estimate of 80 to 90%. Combating our unconscious biases is hard, because they don't feel wrong; they feel right. But it's necessary to fight against bias in order to create a work environment that supports and encourages diverse perspectives and people.

How do you challenge unconscious bias at the workplace?

No one is immune.

How to find unconscious bias and fix it

If no one is immune to bias, what can we do? The first step is to recognize it. It’s important that we move away from the label that who is biased is bad, and who is not biased is good. We’re all biased, and as soon as you start putting labels on people, bias becomes something  nasty, and nasty things we typically want to keep under the surface. But we need to get it into the open, because as soon as you have people, you have bias.” Some specific tools include:

We think it is best to conclude this article by quoting Daniel Kahneman again, from Thinking, Fast and Slow

"The best we can do is a compromise: learn to recognize situations in which mistakes are likely and try harder to avoid significant mistakes when the stakes are high."

Nine side hustles which can make you earn good money

Is moonlighting here to stay?

How the great resignation is impacting HR practices in the market